In a major, nationwide effort, the Environmental Protection Agency (EPA) is studying the relationship between hydraulic fracturing (fracking) and drinking water. It’s important that this study is scientifically sound. Communities across the country, including state and local government, are anticipating its guidance.

The agency held four public information meetings and had facilited meetings with various stakeholder groups, in addition to a public comment period, seeking input into developing its proposed plan to study the relationship between hydraulic fracturing and drinking water.

On June 23, 2010, WV-SORO participated in a stakeholders meeting and provided input on the emphasis of the study and the importance of protecting our rural water supplies (see below).  We also submitted written comments regarding the lack of state oversight of industry’s casing and cementing process and other threats to groundwater from the oil and gas exploration and production. Click here to see our comments.

Click here for more information about the EPA study.

Thank you for the opportunity to provide input on the study that EPA is developing on the effects of hydraulic fracturing and related activities on the quality of drinking water. This e-mail is to follow up on June 23 webinar and discussion seeking input from environmental organizations, and we would like to make some suggestions regarding the emphasis of the study.

The West Virginia Surface Owners’ Rights Organization (WV-SORO) is a member-supported advocacy group for rural landowners in West Virginia who own the surface of land on which natural gas wells, pipelines, and other infrastructure is present. Our mission is to protect and increase the rights of our members when they conflict with those of natural gas companies. We represent over 700 members, mostly residents of West Virginia.  Our suggestions are made from our perspective, of an Appalachian citizen’s group, but we think they are likely to apply to all regions of the US.

The intrinsic nature of the water supplies used by municipalities differs from those available to individual rural homeowners in several critical ways. Streams, the water sources for most municipalities, are inherently more resilient than most aquifers used for water supply by most rural landowners. Contaminants that enter a stream from the land surface, through flushing flows, are likely to be depleted after several major storms. However, a contaminant plume that enters an aquifer may take years, or decades, to pass by an individual well. Therefore, on the time scale of a human lifetime, contamination of an aquifer is essentially permanent. Most municipal water obtained from streams is treated, while most well water is not. If a municipal water supply requires treatment, it’s less likely to be cost-prohibitive to upgrade a municipal water plant than to add treatment equipment to a large number of privately owned wells; and as the individuals are responsible for obtaining the equipment themselves, many are likely to be unable to afford it. If the response to contaminated wells would be to extend municipal water lines to rural homes, this would also be extremely expensive to install and maintain, likely to be hit-or-miss in coverage, and would additionally decrease the potential that the rural water supply would be sustainable in the future.

More resources are available to water managers serving metropolitan areas than to those serving rural areas. A substantial amount of information is already available regarding the effects of natural gas development on metropolitan water sources, while very little research and monitoring has been done on these effects on dispersed, low-yielding aquifers similar to those used by most of our members for water supply. The City of New York, and the Delaware and Susquehanna River Basin Commissions have important scientific, engineering, legal, regulatory, and other resources at their disposal. Rural Appalachian landowners who WV-SORO represents, for the most part, lack these resources, and the federal government has an important role in providing an equitable level of resources to all the citizens of the US. If EPA doesn’t assess the risk to rural water supplies from natural gas development, it is unlikely that anybody will.

Finally, rural landowners, particularly those who are poor and disadvantaged, face great environmental justice issues related to natural gas development. Although there will be exceptions, the majority of the Marcellus development is taking place in rural areas, and much like the coal industry, the natural gas industry is likely to treat Appalachia as a national sacrifice zone. Surface owners are at a legal disadvantage to natural gas companies in many ways. While those landowners who received compensation for their mineral rights will have benefits along with the liabilities that gas development brings, those who inherited or bought surface land without mineral rights, or whose neighbors sold, are likely to have to suffer the consequences of natural gas development without receiving any particular benefit. The US government protects the rights of its citizens to enjoy safe drinking water, and it is unjust for this protection to not be extended to those citizens who just happen to live near natural gas development.

In practice, we think that case studies should include an assessment of groundwater in the Marcellus region, and that they must take into account flow path and water age. Aquifers vary not just regionally, but locally, so any attempt at determining representative aquifers should be done carefully and with the advice of local experts. Most of our members have fairly shallow private wells that are developed in fractures in shale and sandstone, under thin soils, and in valleys that are typically down gradient from natural-gas well sites. USGS data from the Kanawha and Monongahela NAWQA studies show that typical wells in this type of setting have water that is 40 years old, or older; assessing the effects of hydraulic fracturing and related activities in this setting will require a well-thought out local study design and significant resources.

WV-SORO shares the concerns of metropolitan water managers and users that their water be protected. We merely ask that efforts to protect water be done in a way that protects everybody’s water, rather than protecting the water of some of the people while ignoring the water of others.

Thank you again for the opportunity to provide input as EPA develops its plans for conducting this important study. 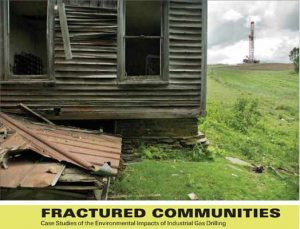