Three bills were alive on the last day of the Legislative Regular Session that would have provided money to begin plugging orphaned gas wells.  Two, SB 665 and HB 2779, would together have paid to plug maybe 100 orphaned wells a year died unexpectedly.  One bill, HB 2673, that might have plugged 60 orphaned wells a year did pass.  However, it was unexpectedly vetoed by the Governor. That bill was reported to be vetoed for technical reasons.

“Surface owners were deeply disappointed by what has happened,” said David McMahon, a lawyer and co-founder of the West Virginia Surface Owners’ Rights Organization.  “The State only had money to plug just one orphaned well last year, and it does not have much more money this year. We hope that the Governor will put a plugging money bill on the call for the special session that does not have his objectionable features.”

McMahon continued, “The Department of Environmental Protection has stated that there are 4,500 orphaned wells now in West Virginia with no responsible operator and no bond to pay for their plugging.  There are another 8000 additional wells that have had no production for over a year and should already be plugged by conventional, vertical drillers. However, production from wells owned by these conventional, vertical well drillers is down 58% in the last ten years, so many if not most of those non-producing wells will be orphaned.  And horizontal shale drillers have sold 17,000 conventional, vertical wells in West Virginia to a company that has said its wells will reach the end of their economic lives in 2048 when it will still have 50,000 unplugged wells across Appalachia.”

McMahon pointed to what recently happened with Trident Exploration Corp. in Alberta, Canada as an example of what has always been going on.  “The problems leading to orphaned wells have escalated to large publicly owned companies so we can document what happens,” he said. According to a press release on Trident’s website, “All 33 employees and 61 contractors have been terminated and approximately 4,700 wells are being transitioned to the care of the [Alberta provincial government].  Trident’s total estimated abandonment and reclamation obligations are approximately $329 million. Behind these obligations, we do not anticipate any recovery for shareholders and unsecured creditors. Likewise, any recovery for secured lenders is highly uncertain.”  After taking these actions, according to press reports, the Board of Directors then resigned.

“Putting an improved version of the vetoed plugging money bill on the special session call is an important first step to addressing the problem of these wells that pollute groundwater and surface and devalue innocent surface owners’ lands.  We ask the Governor to do so.” 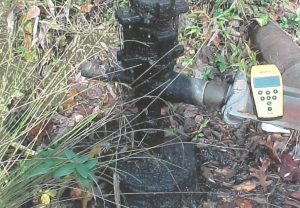