The link below will take you to the web site of the WV DEP Office of Oil and Gas, which is the state government agency in West Virginia that regulates oil and gas drilling.

(Most federal EPA regulation is only indirect – through this state agency.)  (This state agency is a part of the West Virginia Department of Environmental Protection.)

The Office of Oil and Gas site has lots of information.

Enter what information you have about the well you are interested in, and hit Return/Enter to do the search.

Another site, the site of the West Virginia Geological and Economic Survey, has more information about oil and gas wells than the site noted above.  However, in order to use the WVGES site you need the “API” number of the well about which you want information.  See the “Note” below.  You can use other information about the well to try to find the API number on the West Virginia State Office of Oil and Gas site. (See the link two paragraphs above.)

Finally, the best over all site for at least finding wells (and seeing where the newest horizontal well bores are that have been permitted (not necessarily drilled)) may be the West Virginia Department of Environmental Protection “tagis” site.  You can locate well information just by drilling down to where you think it is on the maps and aerial photos of the State using the up arrow in the upper left corner and by dragging if the location you want to the center as you go through stages of magnification.  You can change from topo maps to aerial photos from two sources and also to street maps.  And using the tabs at the bottom you can search by API number, some other information, and even latitude and longitude.

Note:  Every well in West Virginia has something called an “API” number that looks and acts something like a social security number.

The first two digits of a well‘s API number identify the state where the well is found.  West Virginia‘s number is “47” (and since 47 applies to every well in West Virginia, the state web site does not always include the “47”).  The second set of three numbers indicates the county where the well is drilled.  And the final 5 numbers are the unique identifier for a particular well in that county and state.  (The well owner may have its own numbering system for its wells – sometimes including a “farm” name and number.  That may be on the state web site too.  But the API number is the best one to have.) (A.P.I. stands for “American Petroleum Institute“).

If you have trouble finding the production data for a particular well using other information, go out to the well.  The well is required to have the API well number displayed on it somewhere.  It may be on a tag hanging somewhere, or it may be painted or imprinted on some part of the well itself.  Get that API number and use it to do your search. 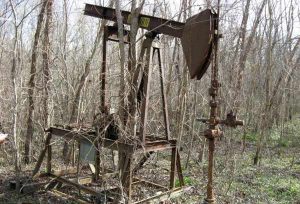