“The usual express easements and implied surface easements of a mineral owner or lessee are limited to such surface use as is reasonably necessary for exploration, development and production on the premises described in the deed or lease.  Of course the instrument may expressly grant easements in connection with operations on other premises.  . . . Absent such express provision, clearly the use of the surface by a mineral owner or lessee in connection with operation on other premises [that were not part of the surface at time the ownership of the minerals was separated from the ownership of the surface if the ownership has been separated, or if the ownership has not been separated, at the time the lease was signed] constitutes an excessive user of his surface easements.  The consensus is that such veto power exists, although there is little case authority on the matter.  The reason for the dearth of such authority is that such veto power appears generally assumed. . . .In §218.4, supra, we indicated our conclusion on the basis of available case authority that unless the deed or lease authorized use of the surface in connection with operations on other premises, the surface owner may prevent the use of the surface for a well location [to produce gas from other premises].  . . . the same rule should apply to the case of geophysical operations on Whiteacre for the purpose of exploring minerals on  Blackacre.  [Emphasis added]”  Williams, Howard R. & Meyers, Charles  J., Oil and Gas Law, Matthew Bender, “Conduct of Operator Injurious to Others” §§218.4 and 218.6. 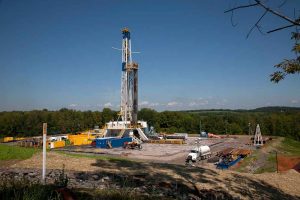