Q.  I have seen trucks “thumping” the ground in my area/on my land, or

A.        A seismic survey is a way the driller tries to be more sure about whether there is oil or gas under your land before drilling a well.  To conduct a seismic survey, a sound wave/vibration wave is sent down through the ground.  The sound waves travel through the ground until they hit something such as a different layer of rock.  Once the sound waves come into contact with something down in the ground, the waves bounce, or echo, back to the surface.  The echos are then recorded on special equipment which helps the driller guess what is under the ground and whether it would make sense to drill for gas or oil.  For more detailed information and several helpful pictures, visit http://www.kgs.ukans.edu/Publications/Oil/primer10.html .

There are several ways the sound waves/vibrations can be sent down into the ground.  One way is for a hole to be dug, for explosives to be placed at the bottom of the hole and exploded.  This is sometimes called the “shot hole method.”   Another way is for a large special truck or some other machine to vibrate or cause an impact with the ground which will also send sound waves/vibrations down through the ground.

Now that you have an idea of what is being done, you will probably have two questions.  First, is there any danger to my land?

If the shot hole method is being used, there are several possible dangers.  First, if too much explosive is used, rocks under your land may crack and possibly damage your water table.  Second,  if explosives are detonated too close to your foundation or your water well, your foundation may crack or a rock strata may crack and affect your water well.  Third, with the shot hole method the holes (they may be 100 feet deep) need to be filled back up with special clay or cement to prevent water or contaminants from leaking down into the ground or between underground rock layers.

We have not yet heard of people having the problems above from the shot hole method being done improperly etc.,  but difficulties and complications are always possible.

The other way to send the sound waves/vibrations are sent down into the ground is with “thumper trucks”.  These are big trucks that have a huge metal foot or other mechanism that thumps on the ground to send the sound waves/vibrations downward.  This is newer.  We also have not heard of any problems and the experts even on our side do not expect any.  But difficulties and complications are always possible.

The second question is, what can you do about it?

To date, we know of no statutes or regulations governing seismic surveying activity in West Virginia.  The common law may give you some leverage on how these surveys are done.  Under the common law, only the owner of the mineral rights under your land, or their agent, is allowed to actually conduct seismic surveys on your land.  Anyone else will have to get your permission first.  So if you see someone doing anything like this on your land you can insist that they prove they are the people with the right to conduct seismic surveys.  If they will not, call the police and ask the police to make them leave until they prove they have the right to be there.  See the next question, (9), about “surveyors on your land.”  Usually the person doing the seismic survey is a contractor for the driller and will leave at the first sign of trouble, but the driller will be harder to deal with.

If you think they are doing a seismic survey too close to your buildings or wells, insist they leave until you can do two things.  First, you want to get pictures etc. or even a professional engineer’s report on your foundation so if something does happen you can prove what was there before they did their work.  The same is true of your well.  Get its quality and production tested by a professional so you can prove what it was like before they started.  Second, insist they leave until they can show you a report from an independent expert, or materials, that show that what they are doing is safe, or until you have a chance to get your own expert.  Such an expert may be hard for you to find, but look for a geologist or professional engineer if you can afford it.

If you see them using shot holes, you want to make sure that they fill the shot holes when they are done.  Insist that you want to be there when it is done and when the holes are filled. Let the local oil and gas inspector know of your interest and ask him how the driller is supposed to fill them so you will know what to look for.

If you absolutely object to all seismic activity on your land, there is one way you might be able to keep it from occurring.  Seismic surveys were first used in the late 1930’s.  If the mineral rights to your land were sold or leased before 1930, then you can claim that such a survey was not in the contemplation of the parties and therefore cannot occur without your express permission.  In order to win on this argument you might have to show that seismic activity will be more burdensome on your land than was contemplated at the time that ownership of your surface was severed from the minerals under it.  However, it should be noted that this argument is probably a long shot and would most likely require a lawyer to file and suit and present it for you in front of a judge.  A better solution may be to think of something you want from the driller and tell him if he does that for you, you will not object to any seismic activity.

Also, ask the driller what geological formation he is drilling to and how deep it is.  This will let you know whether he is contemplating a deep or shallow well (if the driller is drilling to the Trenton-Black River, it will be a deep well).   Chapter 7 will tell you the differences between a deep and shallow well and why you want to know which well is being drilled on your land.

If you want to make life difficult for the driller, you can post no trespassing signs on your land.  If you post your land, this might give you more leverage in negotiating with the driller. If you do this, the driller will have to come to you to get permission.  Or the driller might try to obtain a court order.  But be careful.  If the driller comes to you and shows you proof that the driller has the right to be there, and you still will not let the driller come onto your land, you risk being sued for damages you cause by unlawfully delaying the driller. http://www.kgs.ukans.edu/Publications/Oil/primer10.html. 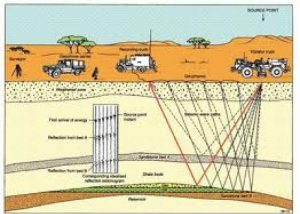