Elsewhere in this newsletter is an article explaining that as a result of a West Virginia Supreme Court decision, in almost all cases, surface owners can sue for substantial money if a driller uses their surface for a pad, road etc. for a horizontal  well — even sometimes if the surface owner already signed an agreement.

In addition, the driller can only do what is reasonably necessary.  So if the noise, for example, was less than having even a conventional well on the neighboring surface’s owners tract, but building a simple noise wall along one side of the pad next door would lessen it, then only the level of noise with the wall is reasonably necessary.

Finally, surface owners everywhere can always sue if drilling harms their groundwater and affects their wells.  There are even some presumptions in the law for certain distances.

So if you are having problems with noise, lights, dust, traffic, water contamination, you should see a lawyer, and we have a list on our website.  Got o our website and look under “New Resources and Advice” for our web page  “A driller is putting a well pad near my house/land. What can I do about it?” for more information. 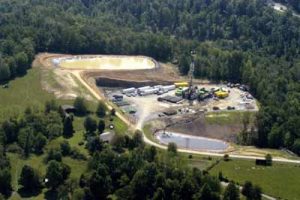