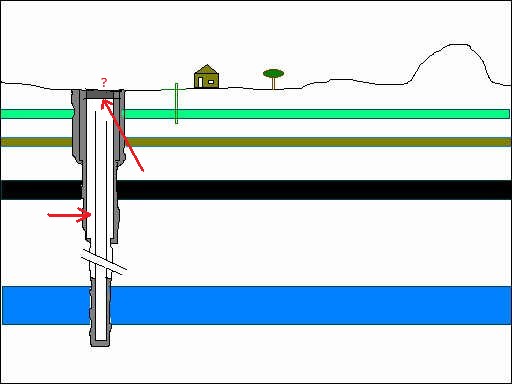 Again, our purpose #3 for this slide show, is to illustrate the concern is that if a plugging company is not well overseen, it may take shortcuts to save money.  This illustration shows that the tubing was pulled, but the production casing was not pulled — only cut off a few tens of feet below ground.  Then instead of filling the borehole with clay and using cement bridges all the way from the bottom in order to isolate formations that could be affected, cement was only placed in the top few feet of the well borehole – the only place where the inspector could see it.  Eveything below that was left open and unplugged.

Note that this illustration shows no above-ground monument was placed.  If no monument is left, when the well is overgrown with vegetation it will be hard to find.  And with the natural movement of earth over time, particularly on hillsides and on bottoms subject to flooding, it may be covered over and very difficult to find.  Many wells plugged many years ago were plugged without leaving monuments.  Some of them were even just plugged by the surface owner with hickory logs because hickory was thought to last longer.  And many, many in the early 1900’s were never plugged at all.  The above ground equipment was taken and the hole may be impossible to find.