After what can only be described as a rough start, DEP’s Oil and Gas Well Drilling Rule was passed by both chambers on the last day of the session. It took some butting of heads and a couple of conference committees [see Thanks (and No Thanks) in our Spring 2010 newsletter for more details], but the rule as finally adopted begins to address drilling for Marcellus Shale natural gas in some positive ways.

The rule provides construction standards for large volume pits and impoundments. Amendments adopted make it highly unlikely that drillers will not use impermeable synthetic pit liners. And amendments were accepted that require notice and opportunity for a hearing for the surface owner, should a driller opt to use just a clay liner. [Click here to read the final language that was adopted.]

While we would have liked to see other protective measures included in the rule, this is a good first step at protecting the state’s water resources from Marcellus Shale drilling operations.

[To read the full version of the final rule approved by the legislature click here.]

Update:  DEP approved the rule and submitted it to the legislature on July 30, 2009.  You can read the agency approved rule, along with the comments submitted on the proposed rule and DEP’s response to those comments here (pdf missing).  Although DEP incorporated a few of our recommendations, the concerns highlighted below remain unaddressed.  The Legislative Rule-Making Review Committee is expected to take up the rule in December or January and we will push for it to be strengthened to our address our concerns.  To date, DEP has yet to finalize its proposed Marcellus guidance document.

The West Virginia Department of Environmental Protection (DEP) is proposing significant changes to 35-CSR-4, the agency rule that regulates “Oil and Gas Wells and Other Wells.”  These proposed rule changes will be sent to the Legislature for its consideration in 2010.

It has been more than 25 years since any significant changes were made to West Virginia’s drilling rules. The state’s regulation of oil and gas well drilling already has many problems, and new exploration using new processes, such as horizontal drilling and large volume fracturing, is creating new kinds of problems that need to be addressed, as well as the need for additional resources to address them. While the proposed agency rule makes some changes in response to the drilling of new Marcellus Shale formation wells, however, additional changes should be made, and existing rules need to be improved. WV SORO shares the environmental community’s concerns with regard to protecting the environment and in particular our water resources. WV SORO and others applaud the changes proposed by DEP, however we are concerned that they don’t go far enough in terms of protecting public health and the environment. (Keep reading or view our press release on the rule change for more details…)

Major issues not addressed in the rule include:

Where will the additional quantities of water required for these new drilling techniques come from?
What ends up in the water when it is used in hydraulic fracturing?
Where do drillers dispose of that water?

DEP  made a meager attempt to respond to concerns about water withdrawals and waste water disposal with a  “guidance” document that will not have the force of law.  As WV SORO and others noted in our comments on the draft document, this level of response from DEP is inadequate, and neither the proposed rule changes or the guidance includes a requirement for public disclosure of the chemicals placed in the water used to fracture a well.

Summary of our comments on and recommended changes to the rule: 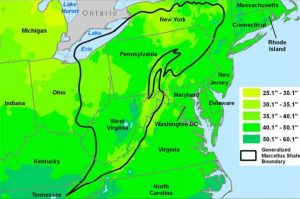