“Statutory “deep” wells are subject to forced well spacing which surface owners believe will result in fewer wells being drilled on surface owners to produce the same amount or perhaps even more gas,” said David McMahon, the attorney who represented the West Virginia Surface Owners’ Rights Organization (WV-SORO) in the suit.  “There is also a requirement that statutory “deep” wells have the surface owner’s consent for the well location.  Unfortunately, another Circuit Court ruling said that this consent requirement does not usually apply.”

In addition to ruling that the wells in question are statutory “deep” wells, the Court ruled that the administrative agency with authority over deep well spacing gave no explanation or justification for allowing the wells to be drilled within 1,000 feet of each other.  The judge remanded the case back to the Oil and Gas Conservation Commission to take testimony and provide findings of fact for making a decision on how far apart the wells should be spaced.

“Surface owners are also pleased with this part of the Judge’s ruling,” said McMahon.  “There is no justification for allowing wells to be that close together.  Some real science should be applied to the Oil and Gas Conservation Commission’s decision making process.”

“Unfortunately, this ruling does not cover the new horizontal wells that are currently being drilled to develop the Marcellus Shale,” said McMahon. “And for vertical wells, after they log the well, they plug the bottom and say it is a “shallow” well. Statutory “shallow” wells are governed by the “rule of capture” so they can be drilled as close together and as close to a boundary lines as the driller wants them, unless a coal owner objects.  The “rule of capture” allows wells drilled on one landowner to produce gas lying under his neighbors without paying for it. What will help surface owners now, and just about every other party involved, is a statutory change to allow forced pooling of all horizontal wells, and all other wells too.”

What is at Stake?

The central issue in the Blue Eagle well spacing suit is whether state laws regarding forced well spacing and royalty/working interest sharing apply to certain vertical Marcellus Shale wells.  If they are statutory “deep” wells, then these laws apply.  However, if they are statutory “shallow” wells, then the “rule of capture” applies and no spacing is required (i.e: wells can be drilled as close together as the driller wants).  Under the rule of capture, wells can also be drilled close to mineral boundaries, draining the gas from under neighboring tracts without paying for it.

The Blue Eagle case started in the West Virginia Supreme Court, but is now pending McDowell County Circuit Court.  Briefs have been filed in Circuit Court and oral arguments were heard in October 2009.  (Click here a complete history.) After the oral arguments, there was a DEP-sponsored meeting to try to foster a settlement on the subject of forced well spacing generally, closely followed by a January 2010 settlement conference before Judge Murensky in Welch.  Neither of these was successful in settling the case.  At the end of the Circuit Court settlement conference Judge Murensky said he had made up his mind and would issue a written opinion within 45 days.  After 45 days had passed and the legislative session ended the without any changes to the relevant statutes, the parties to the case agreed to send the judge a letter letting him know the law remained unchanged.  The judge replied that he would start writing his opinion right away.

Base on comments the Judge made we are fairly certain he will remand the case back to the Oil and Gas Conservation Commission for more fact finding.  What we are less sure of, is whether he will rule that the wells in question or “deep” or “shallow”.

Although attempts to reach a settlement failed, we learned that the industry is interested in a forced well spacing statute that could be used where they are drilling horizontal wells.  (Click here for an explanation of horizontal drilling.)  This would require a change to existing laws and such a proposal may come out of DEP’s review of the oil and gas regulatory process.  WV-SORO generally favors horizontal drilling because one well site, access road and pipeline replaces three or four.  Moreover, if they are horizontal wells are drilled from centralized pads, one well site, access road and pipeline can replace more than 20 vertical well sites, etc.

Because centralized well pads are very large, the down side of forced well spacing is for the surface owner whose land is the location for the centralized pad.  However, existing statutes that allow mineral owners to be forced into well spacing and royalty/working interest sharing also say that no one who is forced into a drilling unit can be forced to have a centralized well pad on their land.  WV-SORO would insist on that this provision be carried over into any future laws regarding forced well spacing of horizontal wells.

If you are worried about a centralized pad for horizontal wells being placed on your land, you might be able to refuse. Click here for more information. 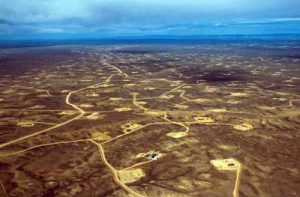