UPDATE FOR 2021: This web page has not been updated between 2016 and the present. That is because there has been no serious attempt to pass forced pooling legislation during that time. However, in the delayed 2021 West Virginia general legislative session, two forced pooling bills have been introduced, SB 538 and HB 2853. And we have heard rumors they might be seriously considered in the Legislature. So WVSORO needs to update its position. WVSORO is now against any forced pooling legislation.
The bill introduced this year has a couple good provisions for surface owners that we think are there because of the advocacy of WVSORO!
However, in part because one-third of our members who have paid dues also own some interest in minerals, and just on general principles, we now oppose forced pooling legislation in West Virginia. There are a number of reasons.
First and foremost is that the recent appointments to the Commission that would decide forced pooling demonstrate that the industry will be totally in charge of the process, and rather than a process which could benefit all of the interested parties, it will be a tool for the industry to do what it wants when it wants for the prices it wants. In particular the newly appointed member of the Commission who is supposed to represent the “public” has had a 40-year career in the oil and gas industry, was once President of the Independent Oil and Gas Association, was once President of the West Virginia Oil and Natural Gas Association, and was the 2014 Oil & Gas Man of the Year. The Commission website says he currently provides consulting and expert witness services for the industry! To read more about this click here and here.
It is clear from history that individual players in the industry will act, including using forced pooling under any new forced pooling laws, in their own individual entity’s short term monetary interest. Those individual players will not act in the public interest, in the State’s interest, in mineral owner’s interest, in surface owners’ interest, or even in the general industry’s best interest. The former executive director of the West Virginia Oil and Natural Gas Association once said that the industry was the industry’s worst enemy because it has become efficient and has over-drilled for gas so that prices are too low. (We were hurt that we were not their worst enemy, but were credited with being a pain.) So individual members of the industry will use the bill to drill unnecessary wells that will drive down the prices that mineral owners are getting — mineral owners who understand that prices are too low and that they would be smarter not to lease or be forced pooled now, but wait — maybe to give their children a legacy when their children would need the benefit of royalties, and at a better price.
It is true that lower prices might benefit consumers. On the other hand lower prices for consumers will mean less incentive to develop renewable energy sources. WVSORO may have members on both sides of that debate. But we are sure that a Commission appointed under the current State leadership will not consider those issues, but instead enable what one member of the industry wants to drill when and at what prices. The very fact this bill is being pushed now proves the point.

What it is, and why it should apply,
instead of  the Rule of Capture,
to the drilling of all oil and gas wells in W.Va.

II. Who is harmed by the Rule of Capture, and who would be helped by well spacing and royalty sharing.

a.  First Example — Illustration of bad results from Rule of Capture

b.  Second Example — Illustration of bad results from Rule of Capture

d.  Fourth Example — Illustration of how wells should be drilled, using well spacing and royalty sharing

V.  So why is the Rule of Capture still the law?

VI.  Why hasn’t the West Virginia Legislature passed well spacing and royalty sharing legislation for all wells in West Virginia?

Prepared by David B. McMahon • Attorney at Law
Copyright December, 2007 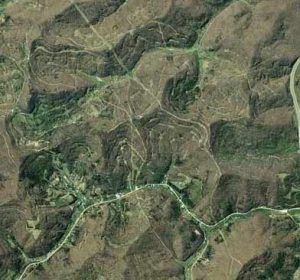