The purpose of this “slide show” is to illustrate how a gas (or oil) well is drilled down into the ground.  Emphasis will be on the measures the driller is required by the State to take to prevent pollution of groundwater or damage to other underground resources, and, despite these precautionary measures, the ways in which pollution of groundwater etc. can occur from this “down hole” gas well drilling activity.

The selection and bulldozing of the well site and access road and the mess caused by drilling activities, are the most immediate, obvious to see, and easy to understand results of gas well drilling. And, pollution of groundwater etc. from “down hole” gas well drilling activities is relatively unusual.  For these reasons, the surface issues are generally what surface owners ask about the most.

However, the potential groundwater pollution etc. is very real and does happen.  So this slide show is designed to educate surface owners regarding the down hole issues that can occur on their land.  You can also read a summary of “horizontal drilling” for coal bed methane which links to illustrations of that new production technique.  Horizontal drilling is now beginning to also also be used in drilling for conventional natural gas in the Marcellus formation.  The Marcellus formation is the new big “play” in the oil and gas fields.  The idea is to drill horizontally in one direction across the natural fractures or “cleats” in the formation.  The techniques are still underdevelopment and too changeable to be placed here yet.

Any comments on the content or suggestions for improvements should be sent to the author at wvdavid@wvdavid.net.

Recently Marcellus Shale gas wells are being drilled horizontally.  A Pennsylvania gas industry web site has an excellent “Drilling Process Video” (on the right side; scroll down a little) on how horizontal fracing is done.  There are some differences between what is stated on the video about Pennsylvania and here.  In West Virginia the driller does not have to get a permit to withdraw water to use in fracing as is needed in Pennsylvania.  Also in West Virginia, particularly southern West Virginia, gas pressures are lower.  So instead of using water to frac the wells, liquid nitrogen is used — which may be better.  The industry video leaves off the details of what can go wrong which are contained on this slide show.  Notice at the end how much territory wells and pipelines processing for Marcellus Wells can take.

Prepared by David B. McMahon • Attorney at Law
Copyright October 1, 2007 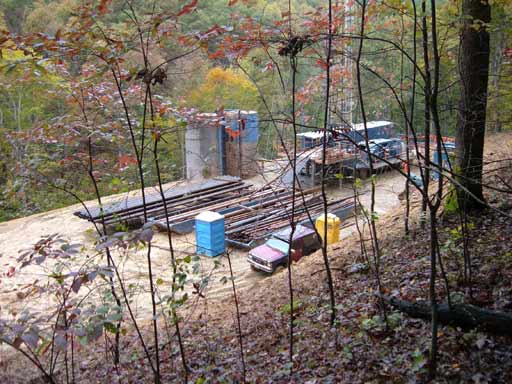 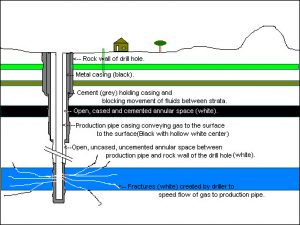