Coal Bed Methane is a methane gas that is “adsorbed” into coal by the pressure of water in coal seams deeper than 100 feet or so.

What about the environment?

This “greenhouse” gas is released to the atmosphere during coalmining as the water is pumped out, if the formation is mined.  So if a coal seam is going to be mined, producing the Gas first is good for the environment..

It is also possible to drill wells into the coal bed, pump out the water up the well shaft, and produce the Coal Bed Methane gas.

In 2007, the State issued a “general permit” for the disposal of produced water from wells that produce the least polluted water.  The permit allows for disposal of the water by treating it and then  by simply spraying it onto the surface of the land (with new surface owner consent).  An operator just uses a form to apply for a Coal Bed Methane well to be covered by the general permit, and if the water meets the parameters, the general permit is extended to that particular well.

Surface owners and environmental groups commented on the issuance of the general permit.  Some concerns were addressed, such as new surface owner consent.  But other concerns, such as the long term effect of spraying lots of water onto the ground to percolate down through the soil, were not fully satisfied. When the Office of Oil & Gas (OO&G) initially issued the permit, part of the rational given for issuing a general permit was “to allow for the collection of environmental data regarding volumes of produced water generated from different coal-bearing strata, the quality of the water generated, the types of treatment systems used, the dispersion techniques of land application of the produced water and the impacts, if any, on vegetation, soil, groundwater and surface water.”  The permit was issued without the benefit of data on how much water would be produced, what is in the water produced or what treatment systems were known to work and set a precedent for permitting activity to see if it would occur.  In July 2009, the OO&G announced it was seeking comments on the reissuance of the General Water Pollution Control Permit number GP-WV-1-07 and is now preparing to renew the permit, with few changes, without providing any justification or rational as to whether the renewal is appropriate or warranted. You can read the comments submitted by WV SORO here.

The State has issued a “general permit” for the disposal of produced water from wells that produce the least polluted water.  The permit allows for disposal of the water by treating it and then  by simply spraying it onto the surface of the land (with new surface owner consent).  The operator of that well just uses a form to apply for the particular Coal Bed Methane well to be covered by the general permit, and if the water meets the parameters, the general permit is extended to that particular well.

Some CBM wells, primarily those that are not horizontal wells, are “fraced” at the end of the drilling phase.  Fractures running through the formation are created, and often filled with sand, in order to allow gas to flow more readily to the well bore and up out of the 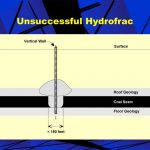 ground.  The fractures created often extend above, or below, the target formation.  Fracing of CBM wells is undesirable.  CBM wells are relatively shallow compared to conventional natural gas wells.  They are therefore closer to formations used by water wells and other groundwater.  There are more likely to be fracture zones and orphaned, unplugged or poorly plugged wells that can serve as conduits between the fracture zone and groundwater.  However, it is allowed.  The fracing is done by pumping fluid, usually, often with sand, into the formation.  Lots of that fluid comes back.  It generally ends up in the drilling permit.  They are allowed to treat what remains in the drilling pit so it, supposedly, is benign, and then spay it onto the land so it soaks in, but does not run into a stream.  Here is more information on that..  Therefore the content of fracing fluids is of concern.  We are still learning about what is in these fluids, and it is changing all the time.  The federal Environmental Protection Agency has done a study.

What about the effect on surface owners?

Using conventional vertical well drilling to produce Coal Bed Methane means putting more wells closer together to produce the gas in these shallow, low pressure coal seams.  Conventional gas wells to the deeper formations that were contemplated when severances or leases occured are much further apart.  So producing Coal Bed Methane using vertical wells means more wells, which means more surface is used for gas wells, and more risk of groundwater pollution occurs with every well drilled.  For this reason the West Virginia statutes give the surface owner more say on where the Coal Bed Methane well sites are placed based on “surface topography and use”.  See The Surface Owners’ Guide To Oil and Gas Chapter 8.

The use of vertical wells to drill for and produce Coal Bed Methane raises another concern for surface owners.  To get the gas to flow out of the formation and into the well bore (and up and out of the well to market), the driller usually “fracs” the coal formation.  (See “How a Gas Well Is Drilled Down Into the Ground, and What Can Go Wrong” in the window to the left – around slide 28.)  The fractures caused by fracing often extend above and below the formation the driller intends to “frac”.  When the formation to be fraced is a conventional gas formation thousands of feet down in the ground, this rarely causes problems.  When the formation to be fraced is a coal formation only a few hundreds of feet down into the ground, these errant fractures could cause problems.  An illustration of this problem was done in a power point slide show done by a gas industry member advocating for horizontal drilling, which does not use fracing.  The driller expected /hoped that fracing would result in fractures 500 feet out from the well bore.  This illustration shows what happened in the northern part of the state where the rock formation above the coal formation was a particular problem.

“Horizontal drilling” for Coal Bed Methane is now being pioneered , and mostly here in West Virginia.  There are huge Coal Bed Methane projects in the West, but they are virtually all vertical wells.  “Horizontal drilling” is done by drilling down a few hundred feet and then out up to 4000 feet horizontally.  This can be done drilling from a single well for some distance to a second well. Increasingly two to five specialized wells are be drilled in a cluster, and horizontal well bores are drilled spread out in one or in all directions from that cluster of wells.  And each initial horizontal well bore can branch out in more directions.  This looks like the veins of a feather and so is called “pinnate” horizontal well drilling. 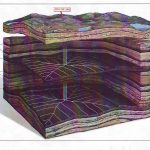 Here is an artists rendition of a large project of horizontal pinnate Coal Bed Methane drilling.  Here is more of an engineering illustration (Note the red  vertical wells that the  horizontal well  system is “instead of”).  Because the size of mineral tracts is often much smaller here in West Virginia, going in all four directions may not be that common.  Here is a actual plat (map) of a smaller horizontal drilling project from a permit application in West Virgina in which the horizontal bore goes more in just two directions.

Using horizontal drilling means using fewer wells to get out the Coal Bed Methane.  So if the drilling is going to be done anyway, fewer wells means less risk of environmental damage while the vertical wells are being drilled through the groundwater table etc.  (See How a Well is Drilled…).  Horizontal drilling also means that there will be fewer well sites and access roads, which is good for those surface owners where those extra wells would have gone.  However, it is worse for the surface owner where the cluster of wells is drilled.  There should be extra compensation, and perhaps even new surface owner consent for this surface owner, since this technology and its huge well site were clearly not in the contemplation of the parties when the minerals were separated from the surface.  Another issue with horizontal drilling is that it drains the water out faster (limited, but pretty much only limited by the capacity of the pump), so problems with the produced water mentioned above can be exacerbated.

Importantly, WV SORO believes that risks of pollution of ground water above the horizontal well bores exist due to the thousands of unplugged or poorly plugged pre-1929 gas wells and other orphaned wells.  Also, naturally occurring fracture zones can result in problems.  See “Water Well Testing” below.

WV SORO believes that even if one of them own the Coal Bed Methane, the extra burden on the surface of the closer more numerous vertical wells, or the much larger well sites for horizontal drilling, were  not within the contemplation of the parties at the time of the severance.  So WV SORO believes that the driller’s must get new permission from the surface owner to drill for Coal Bed Methane.

Suits have been brought in Pennsylvania and may be brought in West Virginia over this issue.

Clearly there is more risk of groundwater pollution during the drilling of the vertical portion of the well bore than of the horizontal portions of the well bore.  But problems can occur.  This is particularly true because there are at least 8000 unplugged pre-1929 oil or Gas wells in West Virginia, and probably 16,000 more that cannot be found to determine if they are plugged or plugged properly.  And there are natural fracture zones in the rock.

If a horizontal coal bed methane well bore goes near these features two things can happen.  First, as the Coal Bed Methane strata is de-watered to produce the gas, the gas can bubble up not just the driller’s new well where is it is supposed to, it can bubble up the unplugged well bores, or the natural fracture zones, to higher rock strata and invade good groundwater.  Second, good ground water in surface aquifers  could get sucked down to and pumped out of the Coal Bed Methane strata.  This could partially or mostly deplete the surface groundwater aquifer, or it could change the flow of water through that aquifer and bring bacteria from a septic system to a water well, or it could cause bacterial blooms from the oxygen in the air that replaces the partially depleted water.

If horizontal Coal Bed Methane drilling is going on anywhere near you, be sure to get your water tested, even if you are not noticed to do so.

This is an area in which much more will probably be happening in the future.

Apr 5 2021  Updates and Alerts
The Legislature is cutting the budget for oil and gas well inspectors, not fixing it!