If there are existing gas wells close to where they are proposing to drill the new gas well, especially if the new well is a horizontal gas well, then there is one way in which the frac fluid could work its way out of the target formation being fraced for the new well and into your ground water.  It will not be a common thing, maybe even rare, but it could happen.

If there is an existing gas well near the proposed well, and if the existing nearby well is deeper than the purposed new gas well, then there is a chance that the pipe of the existing nearby gas well is not “cemented” as it passes through the target formation that will be fraced by the new gas well.  Almost always the existing wells are not as deep as the proposed wells, but if the existing wells are deeper, and if the frac fluid makes it through the rock of the target formation as far as the well bore of the existing nearby gas well, then the frac fluid can move up the un-cemented “annular” space between the outside of the production pipe and the inside of the bore hole.  How far will it go up?  It will go up until it reaches the bottom of the cement job of the intermediate and surface well casings.  (To understand this better, view the slide show on “How a Well is Drilled Down Into the Ground, and what can go wrong.”  This bottom of the intermediate and surface cement jobs will still probably be hundreds or more feet deeper than your water aquifer.  However, if there also is a very, very old shallow well in your area, there is a possibility that those wells were not properly cased and/or are not plugged or improperly plugged.  There are more than 6,000 of those wells in West Virginia!

Here is an article with illustrations of how this can happen.  It has very good illustrations from two actual cases, including pollution caused by a horizontally drilled well.

Before that article was published we provided the illustration and explanations below illustrating only how the problem could occur with a vertical well.   (The gray cementing of the steel pipe casing is simplified.) (If the proposed new well was a horizontal well, the well bore would turn sideways when it got to the target formation (usually the Marcellus Shale these days) and go 3000 feet or more horizontally making it even more likely it will pass near a nearby existing gas well.): 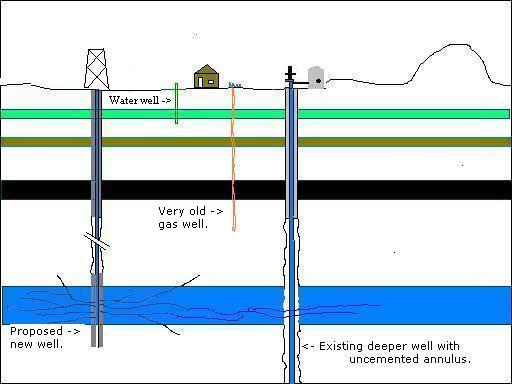 Although it is unlikely, the red line with arrows below shows how it is possible that the frac fluid could travel to your water table. 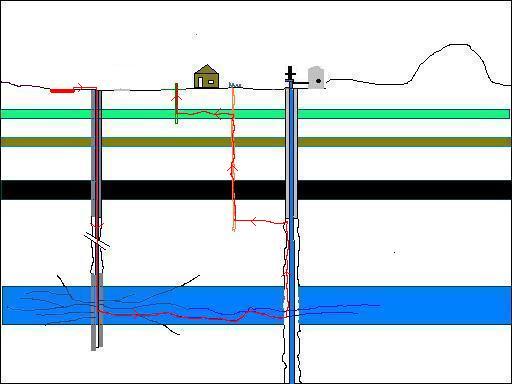 To find if there are wells like this near you, go to the web site of the West Virginia Office of Oil and Gas and on the left under “Database Information”, go to “Oil and Gas Map Search”.  Then click and drag a box around where you live on the map until you find where you live.  The known gas wells in your area will show by number.  (There could be unknown wells in your area if there was drilling there prior to 1929.  If you know of any that are not on the map, and you might try looking on the ground yourself, you should report those to the State Office of Oil and Gas.)  To find out what information is available about that well on line, you can then use the numbers for the wells on that map elsewhere on the OOG data base web site (wells listed as “abandoned” and with not “operator” are the most dangerous) and on the West Virginia Geological Survey “pipeline” web site.  Most importantly you want to know how deep it is and if it was plugged and if so how long ago.  If the information is not there, call the  Office of Oil and Gas at the Department of  Environmental Protection in Charleston.

If you have that situation, be sure and comment on that when you comment on the well permit and ask either that the new well not be drilled or that the existing nearby wells be plugged, particular the very old shallow wells.  This is especially important for the new horizontal wells that spread frac fluid over hundreds and hundreds of acres!