Dawson did put the GPS for my animals in the helicopter navigation computers. However, at least twice they were headed my way, spotted me out doors, then changed course. They still come within a 100 feet horizontally of the animals but they will not fly directly over, unless no one is looking.

Apparently, the helicopter must have had some type of mechanical emergency one day. I came home after dark and woke up in t he a.m. to find the drill rig they dangle from the helicopter just sitting in my back yard. There were no explosives on board, but if someone has children, it is an attractive nuisance.

I destroyed a lawn mower blade on a stake-like device with rings that Dawson puts in the ground every few hundred feet to hold seismic wires in place. These steel stakes are painted gray and that is how they get lost. They need a coat of orange. I only suffered a $20 loss, but if it had been the hay baler it could have been a $1000 repair.

My property has surveyor tape everywhere. Because Dawson picked up the lines in freezing weather, no one took the time to remove all the flagging tape.

Tripping hazard. Something must have gone wrong doing the 3D shot. (I had both 2D and 3D) The 2D wires were in place for 5-6 days, the 3D wires were in place for 4-5 weeks. I got the wires caught on my snowplow several times; fortunately I have a protective cab. Someone plowing with an ATV could possibly be injured by catching a wire. Wires can be too close to the house or other walkways; this can be a problem for someone who walks with a cane or crutch. When Dawson worked inside the Buckhannon city limits, they just put wires everywhere on the sidewalks. I remember mentioning to a Dawson rep that in NY you would have to put up warning signs, and tape them safely. He said they have been sued in NY.

I have a shot hole in the backyard that because of the snow no one ever refilled. I am not sure if it even fired. The blasting cap wires are still visible.

They may drill from the air, but the ground teams still have to stretch wires and walk around with ground penetrating radar to look for pipelines and utilities. There will be bent fences, broken posts and trampled daisies, no matter what they promise.

The “Dog House,” or what ever they call the trailer that receives the signals, will have to be plopped down on someone’s property. They simply set up in my neighbor’s hay field, then asked for permission. They did not discuss compensation until I got on their case. They paid $25 for each 24 hours in his field. Because they make a slight mess, there are additional vehicles coming and going, plus there is no toilet on board, I thought the payment was a little light.

Work is literally sunup to sundown. You can easily be surprised walking around your barn and bumping into a worker at 6:15 AM

The Dawson reps responded to any reasonable requests. The field workers were polite, quick and quiet. But some were non-English speaking and had some difficulty understanding a safety concern I had for them about going down into a steep ravine at dusk. Also on the clean upside I don’t think they understand that they were supposed to remove every piece of Dawson flagging tape. They did bend a few fences climbing over them. Some of my fences are very old and this caused some damage. I accept that these were old fences and not worth my time complaining about them, but for some 75 year-old struggling farmer, it is a problem.

The helicopter noise goes on for days — weekends and holidays included. If someone is having an outdoor event, they need to negotiate with the company. Dawson promised they would avoid an outdoor party we planned to have.  I ended up being away for an emergency, and I never paid attention if they did fly over that day.

The helicopters will negotiate with a landowner for storage space for the long-term storage of equipment and supplies overnight. This becomes an ad-hoc airport and trucking terminal if you are a neighbor. They may bring the choppers back to an airport at night for service, but the supplies will be staged out in the field. I don’t know how much that storage space pays, but the neighbors should receive something for the noise and traffic delays. 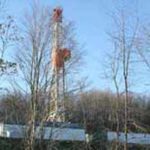 Aug 1 2018  Pads and Other Disturbance Advice
A driller is putting a well pad near my house/land. What can I do about it? 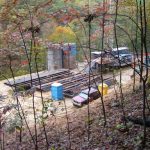