The “Natural Gas Horizontal Well Control Act” (HB 401) passed in a special session of the Legislature on December 14, 2011, just 3 days after its introduction.  It was totally the Governor’s bill, with little reference to our proposed Surface Owners’ Bill of Rights or to the bill proposed by the Department of Environmental Protection (DEP) under the Manchin administration.

The Governor’s bill was not as good as and bore little semblance to the bill the recommended by the Legislature’s Select Committee on Marcellus Shale. At a press conference after the passage of the bill, a lawyer for the industry was thanked for helping to write it!  And there are things in it that hurt surface owners that we understand the industry did not even ask for!

We are currently working on updates to our web site to educate surface owners and others about the relevant changes made by the Act, but that work has been delayed by the regular legislative session and some work on the studies and rulemaking that the Act requires.  We hope to have these updates available on the website soon.  Until then, unless a page says it was updated in 2012 or later, some of the information on this website may not apply to horizontal Marcellus Shale wells.

For now, here is a copy of the Act that we have marked up to show some, but not all, of the changes from current law.  We have also prepared a summary of the bill (updated 4/23/2014), which outlines the changes most relevant to surface owners.  If you are directly affected, call or e-mail us with your questions.

The DEP has now promulgated rules carrying out the Act.  Their structure parallels the rules for conventional vertical wells and they include many similar provisions.  There are differences however in things like water well testing parameters.

Also, here is a link to the DEP’s new Horizontal Drilling Permit page required by the Act.

We do believe the existing common law about driller’s rights helps surface owners, though it may take a law suit, and you should read our web page about those rights.

Surface owners and the environment did not get much help from the Act.  We intend to continue to pursue our goals through the various studies and rulemaking actions it requires, but mostly through court cases.

The Act does have some small improvements — mostly in the area of notice before the surveyor and bulldozer show up on your land — but provides precious little help in negotiating a fair use or value for your land when they come.

The Horizontal Well Act passed in December 2011 required the Department of Environmental Protection (DEP) to conduct three studies regarding various impacts from horizontal well drilling.  Based on these studies the DEP was mandated to do rule making if it determined additional regulations were needed. 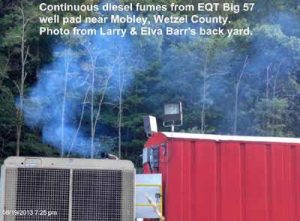 We appreciate that the DEP recognized that something needed to be done. However, rather than doing rule making, it hit the ball back to the Legislature’s court, recommending they revisit the setback provisions of the Act. DEP’s recommendation was that the distance from occupied dwellings be measured from the nearest edge or limit of disturbance (LOD), rather then the center of the pad “to provide for a more consistent and protective safeguard for residents in affected areas.” We agree, however, setbacks alone are not sufficient, and the DEP did not recommend the distance that should be enacted for the setback.

At a presentation before the legislature in August 2013, the DEP said it does not yet have a hard scientific standard to use as a basis for establishing a setback.  In their cover letter explaining why they were not doing rulemaking, the DEP said, “there are no indications of a public health emergency or threat” based on the data obtained through the studies. DEP should not wait for an emergency to act.  We believe the DEP should prevent emergencies.  Protections are needed below the standards for a public health emergency.  People living near well sites are experiencing health problems now.

It would be nice if they had more scientific data.  But they have all of the scientific data that is available.  And there is enough data currently available that something should be done now.

In addition to increasing the setback distance from homes to 1,500 feet from the limit of LOD, the following recommendations from researchers at WVU should be adopted with regard to noise, dust and other air emissions from horizontal drilling sites:

Increased Setbacks AND Monitoring Needed for Noise, Dust and Other Air Emissions
The first study due was a study on noise, light, dust and volatile organic compounds (VOCs) as they relate to the distance wells can be from occupied dwellings.

Concern about air quality has become widespread among SORO members and others living in communities impacted by oil and gas drilling. Although well pads should be further away from peoples’ homes for other reasons such as protecting property values, we agree with the study’s author, Dr. Michael McCawley, that a setback distance is not the answer to addressing air quality problems due to variables in topography and meteorology – and because of the cumulative affects of having many wells in a particular area.  Wetzel County, for example, has more than 325 wells on 108 pads.

We support Dr. McCawley’s recommendation to conduct short and long term epidemiological studies like the one in Colorado (and cited in his report) that showed increased cancer risks within ½ mile.  But mostly we agree with Dr. McCawley that the people of West Virginia should not be guinea pigs.  The studies Dr. McCawley suggests should be done, but we should NOT wait for the results of a long-term health effects study to act.

We also support Dr. McCawley’s recommendation to monitor noise, dust, and other air pollution in real time and, and requiring drillers to alter their operations to avoid exceeding the emission standards for these parameters.  Starting now – for all new horizontal shale wells (not just new pads but new wells) – drillers should be required to set up a monitoring trailer at the nearest residence, or other point of impact, that would transmit data in real time to the operator, regulators and those living nearby.

If the industry is concerned about the cost of having to curtail its operations to meet these requirements, then they are sacrificing the health and the life savings of West Virginians to do so.  Dr. McCawley said this is something the industry can do for about $150,000. In most cases, that is only 1/4 of 1% of what is costs the driller to develop a Marcellus well site.
Unfortunately, the DEP has already demonstrated that it will not require drillers to follow Dr. McCawley’s recommendations.  We need the legislature to incorporate them into law, in addition to increasing the setbacks currently in place.

Other Recommendations & Findings from the Studies

Dust
In addition to being part of the air quality monitoring, dust should be controlled so it does not show up on peoples’ porches and cars. It’s a simple enforceable test. If there is dust on peoples’ porches and cars, the standard is being violated.  Dr. McCawley’s report says regulation is needed – “Workers noted that the only use of wetting agents that they had seen were when the sampler was being placed on site.  While this may be an exaggeration, the amount of fine dust collected at the sites . . . [was] visible proof that some increased wetting agents use was needed”, as well as slower speed limits.

Noise
The executive summary prepared by Dr. McCawley and reviewed by DEP said that the average noise levels recorded were below the EPA level established for long-term hearing loss — 70 dBA or the equivalent of a kitchen exhaust fan on high.
DEP’s standard for noise should not be hearing loss.  The standard should be based on whether it disturbs peoples’ sleep and whether it raises their blood pressure or otherwise affects their health.

The study noted that EPA said that average noise at 55 dBA interferes with outdoor human activity, and 45 dBA interferes with indoors activity. And there are health effects.  According to the World Health Organization, at 30 to 40 dBA, “A number of effects on sleep are observed from this range: Body movements, awakening, self reported sleep disturbance, and arousals.  Above 55 dBA, “The situation is considered increasingly dangerous for public health. Adverse health effects occur frequently, a sizeable proportion of the population is highly annoyed and sleep disturbed. There is evidence that the risk of [heart] disease increases.”

We support Dr. McCawley’s recommendation for impact point monitoring for noise, and for changes in operations if the noise level exceeds 55 decibels at peoples’ homes.

Pit Safety and Construction
The important points regarding the pit study are: 1.) the industry cannot be trusted, and 2.) we cannot rely on the current system of regulation and enforcement.

Some of the pits included in the study were constructed before the Horizontal Well Act went into affect.  The Act required pits to be built according to plans drawn by registered professional engineers. Those were somewhat better, but not without problems.

The engineers at WVU responsible for the study looked at fifteen (15) sites. At eight (8) of the 15, impoundments were not built to the specifications in the plans.

Six (6) of the sites were chosen for on-site field compaction density and moisture content testing.  Seventy samples were taken at these six sites.  Only 8.5% of the samples met the specified compaction standards.

According to the report, “these deficiencies reflect a lack of adherence to the best management practices set forth in the West Virginia Soil Erosion and Sediment Control Field Manual.”

The study also found DEP inspectors have no formal training when related to pits, impoundments and inspections.  The inspectors only targeted the readily apparent problems such as slips and slides, while not recognizing or fully understanding indicators or warning signs of other problems that could lead to an emergency situation if not corrected and allowed to progress.

Pit Contents and Impacts on Water Quality
The second part of the pit study looked at the potential for groundwater contamination from pits, as well as the toxicity and radioactivity of the waste materials that end up in pits, including cuttings.

While WVU was monitoring the groundwater around the pits that were studied, no leaking or contamination was detected. However, when a contaminant plume enters an aquifer, it can take the plume longer (years or decades) than the duration of the monitoring to reach an individual water well. This study should be continued long-term.

As far as the toxicity of the cuttings and other contents of the pits, the study tested flowback.  Not surprisingly, since the Marcellus Shale is known to be radioactive, the level of radioactivity in samples of flowback taken at 4 of the 5 sites exceeded safe drinking water standards.

The study also analyzed some cuttings from toxicity including radioactivity — but these were only from vertical drilling! Researchers were not given access to or provided with samples of cuttings from the Marcellus Shale – cuttings that other studies have confirmed are radioactive.  How radioactive? We still don’t know.

Because the Marcellus is radioactive and because pits contain other potentially hazardous substances, on-site burial of Marcellus drilling waste must be banned.  We appreciate that most drillers are now using closed loop systems, are taking it to landfills and cannot bury it on-site without the surface owner’s consent.  We expect the industry agreed to this because it understands the dangers of naturally occurring radioactive materials or NORMs. From surface owner perspective, taking this waste to landfills is certainly better than on-site burial.  Nevertheless, we understand and appreciate the concerns of some local solid waste authorities and our allies in the environmental community about the waste going to landfills that are not designed as hazardous waste landfills. So, what should be done?  See SORO Concerned About NORMS on page 4 of our Spring 2014 Newsletter.